This year the micropaleontology interns will dedicate most of their time to cleaning up unfinished projects from the previous two summers, working through the remaining quota of images and CT scans, and, finally, wrapping up with quality control checks. At the AMNH, each microfossil collection typically corresponds to a paper (published or unpublished), usually written in the mid-20th century or earlier. Part of what makes our work interesting is that every collection is different and, consequently, presents its own curation challenges. Below are descriptions of some of the projects we’ve been working on during our first two week at the museum. 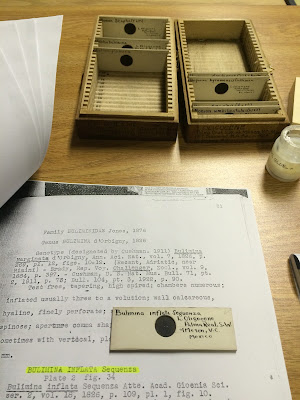 Not every microfossil collection can be clearly associated with a publication, and sometimes specimen slides contain misleading information. For example, this week Brittney was assigned a collection that appeared to have been collected by the famous H.M.S. Challenger expedition, which led one of the earliest attempts to document marine life across the Atlantic, Pacific, and Indian Oceans. The resulting monograph was authored by Henry Brady (1884), a pioneer in the study of foraminifera, and is still widely used today for its high-quality illustrations. Needless to say, this collection was a potentially exciting find. Only after consulting our resident foram expert was it determined that the collection was actually made by an unknown collector--possibly "Dorr"--who may have revisited some of the Challenger's original collecting localities. Brittney has been matching specimens from this collection to their locality information, including forams from Fiji and Tonga (27 slides) and Sable Island (unquantified # of slides). 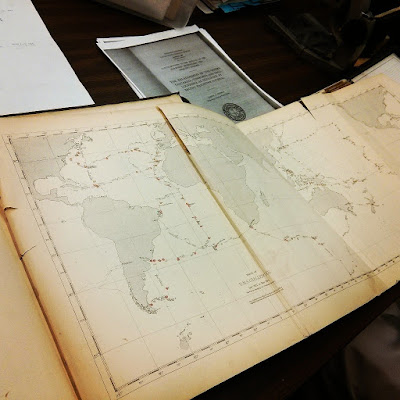 Route of the H.M.S. Challenger Expedition 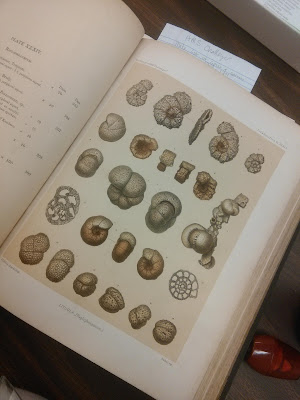 Brady’s monograph contains detailed illustrations relative to most other publications the interns are working with (compare to Diamond 1928, shown below).

Morgan’s first collection did not contain foraminifera, but was a large collection of ostracods collected by H. N. Coryell of Columbia University. The collection was partially completed by a former intern, but 40 slides remained to be curated, rehoused, and databased. Morgan was responsible for completing these tasks, as well as imaging one paratype to compliment the 16 previously imaged holotypes. 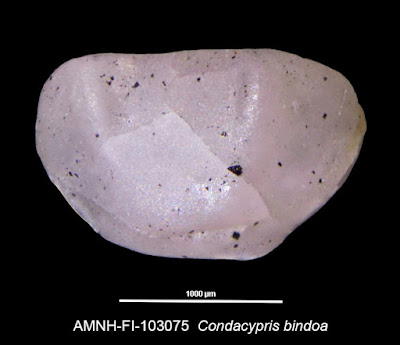 The Diamond collection was Lindsay’s first project. It contains 45 slides of foraminifera, several of which may contain new species. This collection was completely uncurated when Lindsay received it, meaning she had to catalog, database, and rehouse every specimen present, as well as document any missing slides or lost specimens. All potential new species were imaged, and one of these specimens, Gaudryina n. sp., was added to the CT scanning queue. Because the results of this master’s thesis were unpublished, it is likely that these specimens have remained untouched in the museum’s cabinets for nearly a century. 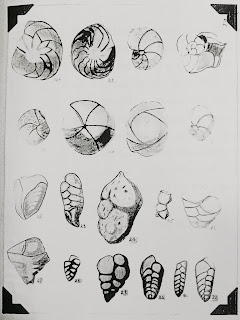 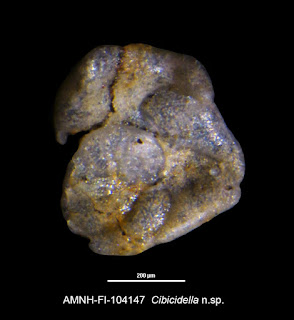 As the invert paleo interns learned from Ellen Thomas this week, fusilinids comprise a group of foraminifera that disappeared along with >90% of other marine species during the end-Permian mass extinction event (~250 Ma). These forams differ from other foraminifera in that they are much larger (visible to the unaided eye) and their tests (shells) are structurally more complex. This week Sam imaged and databased 40 petrographic thin sections from this collection of fusilinid foraminifera. That this collection contains only thin sections is unusual; most of the other AMNH microfossil collections consist of specimens glued to cardboard slides. This meant Sam had to image every slide in this collection as opposed to type specimens only, as is the standard protocol for collections mounted on cardboard slides. 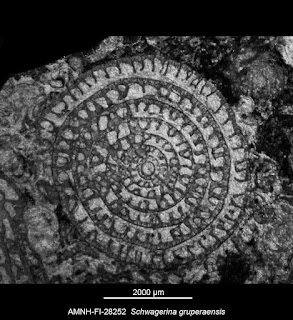 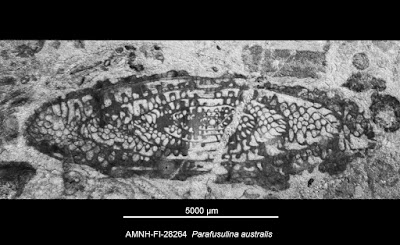