The rehousing, imaging, and databasing marches on this week!  Also, we had a tour of the Ornithology Department.  Some of the highlights of this tour was seeing an extinct Ivory-billed Woodpecker, an array of colorful Kingfishers (a favorite of our tour guide, Paul Sweet), a variety of nests and eggs, and the preparation lab.  We also got to talk with a researcher who was looking at the variation of structural feather colors among Rollers using a device that he could hold over any feather and it would output that feather's exact color.

Here are some of our favorite foram and ostracod pictures from this week! 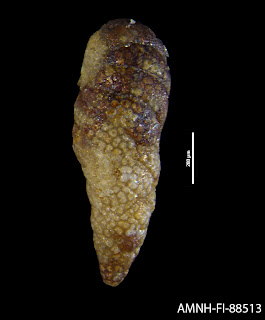 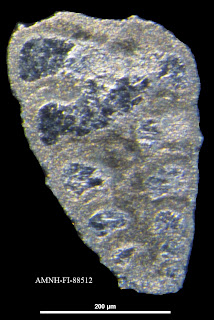 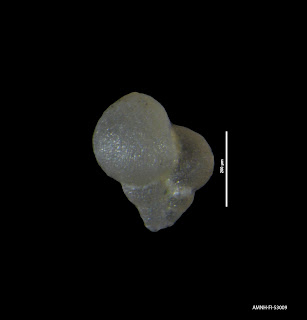 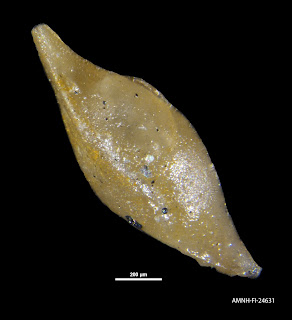 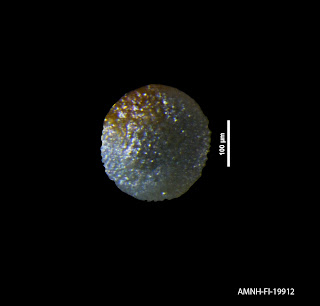 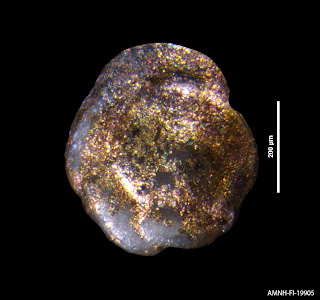 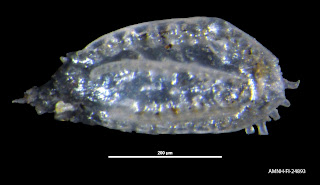 Posted by Microfossils Project at 2:39 PM No comments: 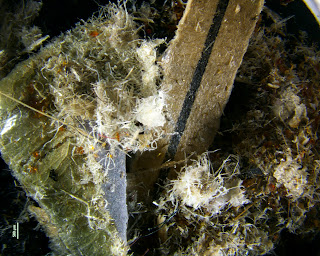 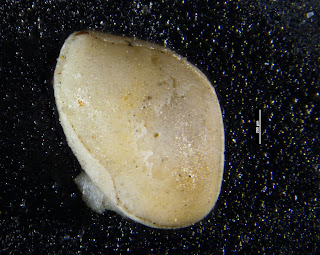 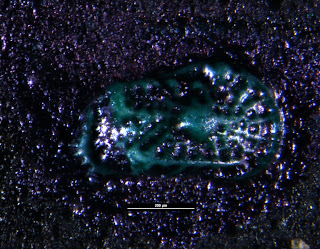 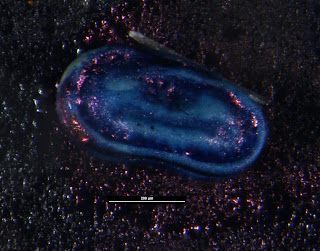 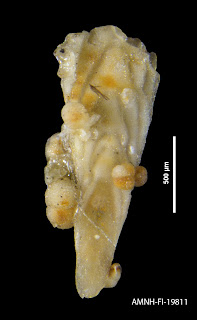 -Autumn
Posted by Microfossils Project at 11:29 PM No comments:

Week 3 has come to a close. I cannot believe that we are going to be half way through our internship soon. This week we had a lot of fun museum activities, as well as a full week of work with the collection. We went on a tour of the Herpetology Department, and saw a lot of cool specimens. When asked about his favorite specimen housed in the collection, our guide David told us he thought the remains of Lonesome George was one of the more unique specimens. Lonesome George was the last of a certain species of Galapagos tortoise who recently died. Ellen Thomas also came in again on Thursday to give us a lecture on cladistics. The cladistics lecture was really quite interesting and afterward we walked around the fourth floor of the museum, which is an exhibit about the origin of vertebrates that is arranged by clades. 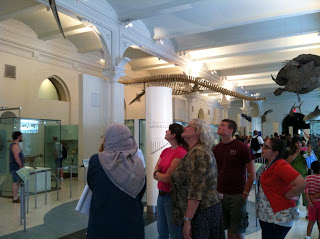 The work continues on the rehousing, imaging, and databasing of the specimens. Everyone has finally gotten into the groove of using the camera and photoshop so the pace of work has picked up a bit this week. Some of the foraminifera that have been imaged this week are especially beautiful, and here is an example of a few. 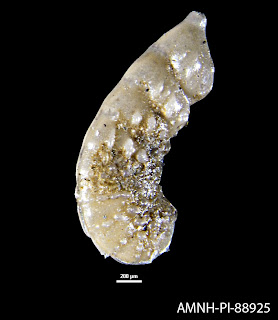 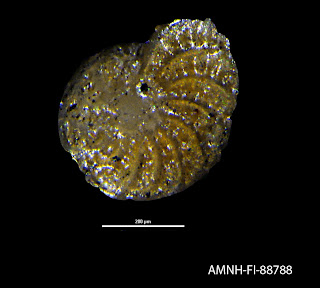 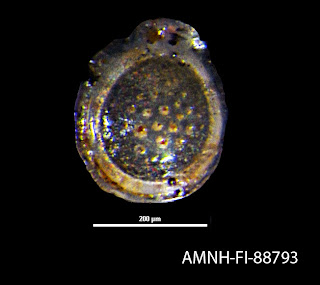 Posted by Microfossils Project at 3:40 PM No comments:

Our second week as interns participating in the Microfossils project has officially come to a close. I think we can all agree that time seems to be flying by. Whether this is because of the amazing experts we have had the chance to work with so far, or the awe-inspiring experience of working behind the scenes at the museum—I guess we’ll never know. After receiving our projects during the first week and learning all about what was expected of us, I think we all assumed it was going to be a plug and chug task. We would just rehouse, database, photograph and edit. We all know what they say about people who assume. The truth is, not everything has gone smoothly. There have been slides with unidentified specimens, specimens that have disappeared, and images that would just not come out clear (just to name a few). You would think that with every mystery slide, missing specimen and blurry picture, that this would be frustrating and honestly… sometimes it is, but we all understand the importance of what we’re trying to do and that keeps us moving forward and inspires us to keep learning. One thing that is extremely important for this project is accuracy and the best way to be accurate is to understand exactly what it is that we are doing. Having Dr. Ellen Thomas come in and explain to us the importance of Foraminifera and Ostracods has helped put this project into context. Now when I look under the microscope I don’t just see a shiny little shell, but a small yet complex organism that serves as our window into the climate of the past. With Ellen’s enthusiasm for the topic, it makes it hard not to grow an honest interest in the subject. We are all truly lucky to have her on board. So far, this internship has been one of the greatest experiences that we’ll ever have and we look forward to seeing what lies ahead in the coming weeks! - Beth Gerstner
Posted by Microfossils Project at 3:56 PM No comments:

Week one of interning at the museum has been exciting, educational, and entertaining. Our activities included an orientation, being finger-printed, group lunch on the museum steps, tour of the vertebrate paleontology department and anthropology department, and jam-packed rides on the elevators. Each intern has received a project and we are all making great progress. It is safe to say these 8 weeks will pass very quickly due to the fun and exciting work environment. The six of us have quickly began to bond and have transitioned from colleagues to friends in a matter of days. Stay tuned for week two's blog from the Foraminifera Focus Group.
Posted by Microfossils Project at 2:27 PM No comments: 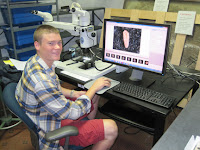 Samuel Martin - an upcoming senior at Southern Illinois University who is majoring in Geology. Currently I am involved in climate change research in Antarctica using foraminifera. Transitioning to the big city from the Midwest has been quick and fun. 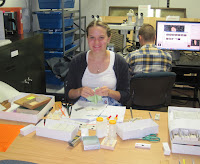 Amanda Lanik: Hi I'm Amanda! I just graduated from SUNY Geneseo with a degree in Geology. I'm from Canandaigua, NY, which is a small town in the Finger Lakes. I'm really excited to be working with microfossils this summer and cannot wait to explore the museum and New York City!

Autumn Von Plinsky recently graduated Yale University (class of 2013) with a degree in Art. Her background in painting and theater tech hasn't gotten her very well acquainted with Foraminifera, but hopefully this internship will. 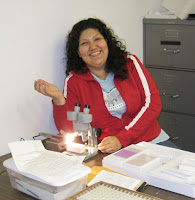 Rabia Ashfaque: I'm a graduate student at the School at Visual Arts in New York, currently pursuing a Masters in Art Criticism and Writing. I started out at the AMNH as a volunteer in the exhibitions department. Two-and-a-half years later, the volunteer has become an intern trying to wrap her head around the complex, fascinating and visually stunning world of foraminiferida! 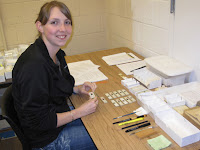 Beth Gerstner: I will be starting graduate school at the City College of New York this fall and what better way to get focused than cataloguing foraminifera. If nothing else my handwriting skills will improve ten fold! But in all seriousness, I'm very excited to be part of this internship. I've always loved the museum and I want to be involved behind the scenes in any way that I can.


Courtney Richenbacher: Hello! I am from Iowa and recently graduated from the University of Iowa with a degree in geoscience and a certificate in museum studies. I will be starting graduate school this fall for a masters in museums studies. I have little experience with forams and am excited to learn as much as possible to help me with my future in museums!
Posted by Microfossils Project at 10:51 AM No comments: